For this Valentine’s Day, imagine if your beautiful bouquet of roses could stay that lovely and colorful forever. Well, an antique or vintage perfume bottle may be the perfect answer! 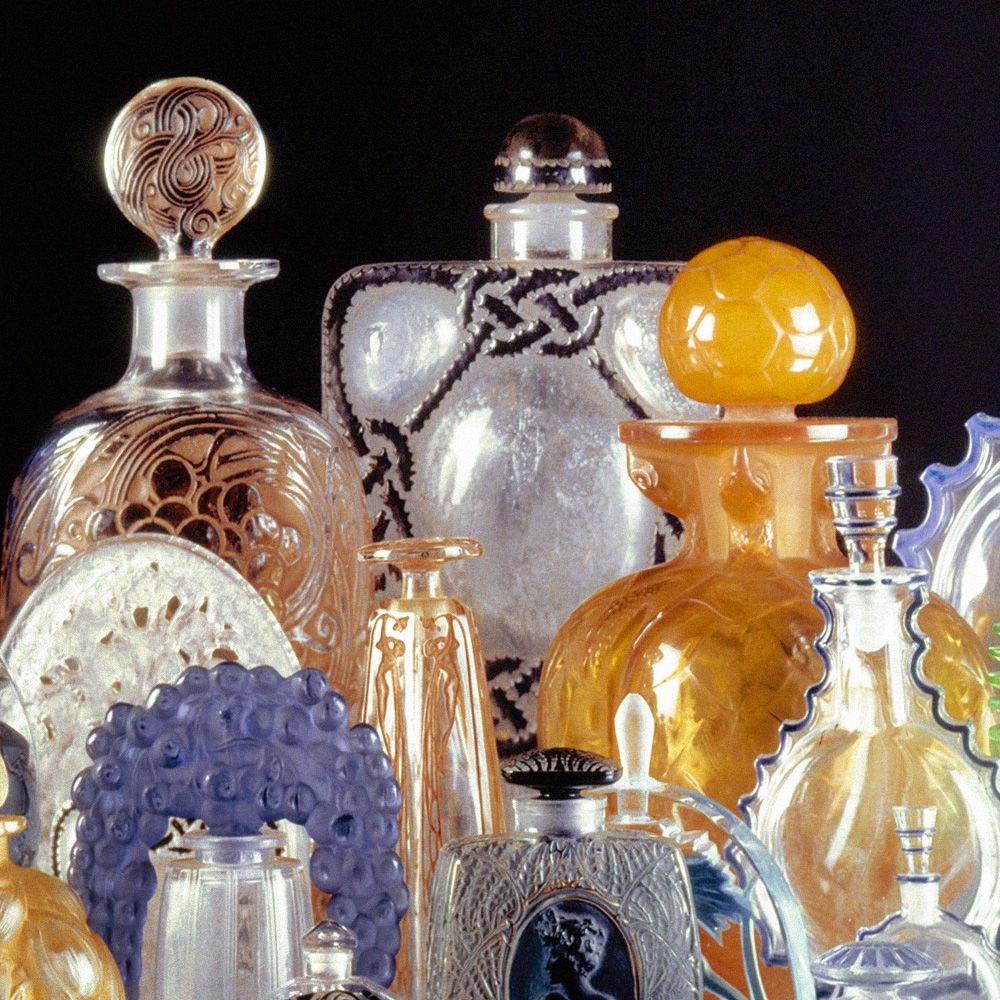 Glass perfume bottles come in a rainbow of colors, sizes, and designs, making them a delight to collect! Imagine this assortment of candy-colored glass bottles: cotton-candy pink teardrop shaped ones, baby-blue squares, frosted crystal ones with eye-catching stoppers, dazzlingly clear-cut glass bottles, and, maybe even ornate gilt-covered bottles dotted with pearls and gems. Sounds like a dreamy, crystal-crafted “floral” bunch!

Perfume, and, more specifically, perfume containers have been in use for thousands of years. The ancient Egyptians had actually used glass bottles as scent containers. The art of perfume blossomed, however, during the 18th century, when the perfume bottle became an art object among kings, queens, and members of the nobility. In fact, perfumers (the skilled individuals who create fragrances and perfume compositions) sought out other craftsmen (including jewelers, silversmiths, goldsmiths, and porcelain makers) to collaborate on creating luxurious containers for their perfumes. 1

This tradition has continued into the present. Rene Lalique, the celebrated French glassmaker, became particularly renowned within the world of glass perfume bottles. Lalique was a successful jewelry designer in the late 1800s in France before he transitioned into glass art around 1905. His glass art attracted attention throughout Europe. In 1907, the French perfumer Francois Coty commissioned Lalique to create new bottle designs for his various fragrances. From then on, Lalique became the “go-to” perfume bottle designer for many perfume companies – from Guerlain to Houbigont – and his son, Mark Lalique, established relationships with Lancome and Nina Ricci.

Lalique combined artistic glass designs with less-costly methods of glass production, making his bottles beautiful-looking, yet affordable. In addition, perfume was being marketed as a glamorous product. Each perfumer company’s new scent had an alluring name, was contained inside a beautiful bottle, and wrapped with a pretty label and its matching box. Customers loved these gorgeous perfume packages, and there is value in this art today! 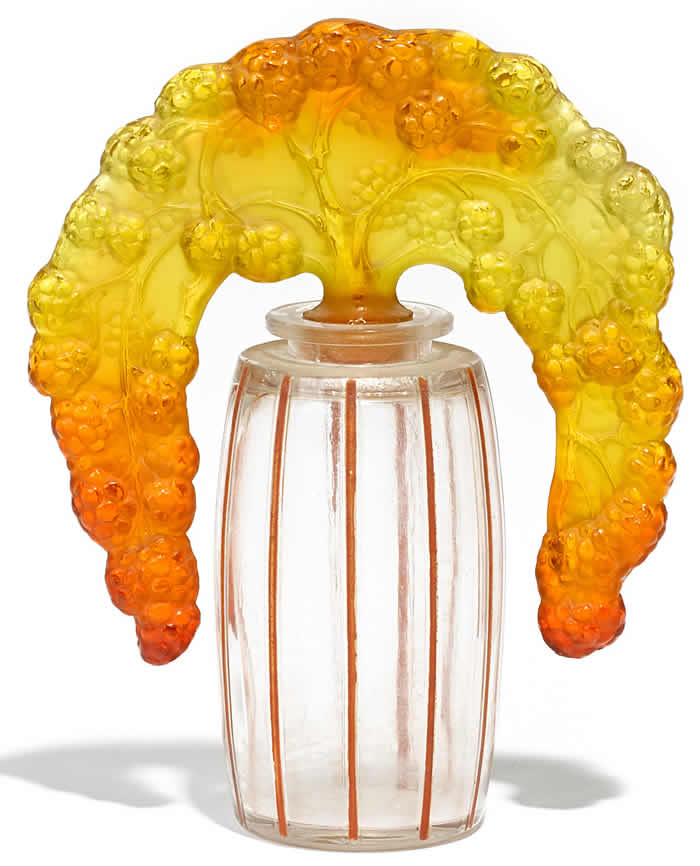 Perfume bottles designed by Lalique attract some of the highest appraisal values. The “Bouchon Mures,” for example, a clear-glass bottle with vertical red lines and an ornate, draping mulberry tree-shaped stopper (crowning the bottle like a tiara) is valued at $18,000! Another Lalique bottle, used for a 1922 Parfums De Voinay of Paris fragrance, composed of a heart-shaped bottle covered by a molded coral pattern, is valued at $4,500.

Appraisal values for Lalique vary greatly. Robert Prescott-Walker, a Lalique expert, defines three appraisal categories, or “Bands,” for Lalique bottles. The four main components are opalescence, color, condition, and design rarity. Although many Lalique pieces are either clear or frosted glass, several others are colored glass or opalescence glass (so all four categories are not relevant for every piece.) 2

Band 1: If opalescence, poor quality; if colored, a common color. Could have extensive damage in areas. Relatively common design. Value: up to $680.

The Wonder of Perfume is a wonderful book to glance through to become familiar with the variety and values of perfume bottles! This book showcases the catalog of all the lots of perfume bottles that were up for auction in 2004, the 14th (XIV) Perfume Bottle Auction. 3 There are many different types of lovely and whimsical perfume bottles – imagine looking at hundreds of glass genie lamps! The book also lists the price each bottle sold at, so you can get a sense of the values of each bottle “category” and what makes some more unique.

Mary Gregory: Mary Gregory was an artist who decorated glasswork for the Boston and Sandwich Glass Company, a Massachusetts glass company, in the 1880s. Her artistic style featured a white enamel rendering of “Victorian”-themed motifs, specifically of children at play. In the world of glass art, pieces which feature her iconic designs are known and referred to simply as “Mary Gregory.” She had decorated several perfume bottles in her signature style for The Boston and Sandwich Glass Company. These pieces are appraised between $250-450.

Cranberry Glass: A pink shade that can vary in color. For perfume bottles, the glass usually looks light pink or magenta, but sometimes, the glass can be a deep “cranberry” red color.

Milk Glass: An opaque white color. It can be tinted with semi-bright pastel shades of blue, green, or pink. (So a milk glass piece can be blue instead of white.)

Fenton Art Glass Perfume Bottles: A West Virginian glass art company from the 1940s that became well-known for its “hobnail“ design (a pattern of little bumps which cover the entire object).

Fan stopper: This is the cap of the perfume bottle. Functioning like a “cork,” it plugs the spout of the perfume bottle. Many “fan” stoppers do span out from the top like a peacock’s tail, but many are also specific shapes. Some fan stoppers can be quite large, sometimes taller than the bottle itself! When examining perfume bottles, make sure the stopper appears to fit well – both as a stopper and as part of the overall look. Due to their fragility, sometimes the current stopper may not have been the original one.