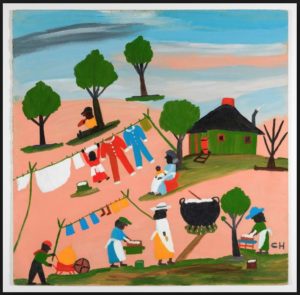 Sunny days, backyard barbeques, campfires, and pool parties – these are some of the hallmarks of the Great American Summer. Let’s cap off the sunlit season with some “homespun” fine art: American folk art paintings.

Today, “Folk art” is a controversial art term, often used in contrast (and often, inferiorly) against “high art” or “traditional art” (i.e. the works of Monet, Van Gough, etc.). But with the conventional subject matters (such as landscapes, people, and animals), as well as naturalistic colors, “folk art” is thought of as “the people’s art,” or the art of the common man. It is recognizable and evokes feelings of home, comfort, and nostalgia. In a way, this genre of art – American folk art – acts as a “family” scrapbook, capturing precious moments of early life in the United States through charming portraits, quaint depictions of “life on the farm,” and picturesque sailing days of yore.

As The Museum of Modern Art reveals, “Folk art had a place in the life of this country from the early days of colonization up to the Civil War. The great period of American folk art covers about two hundred years, from the second quarter of the seventeenth century up to the third quarter of the nineteenth.” 1

For this reason, most of this art developed in the “eldest” region of the United States: the Northeast – stretching from New England, down the Atlantic seaboard, and throughout Ohio, Pennsylvania, and New Jersey. 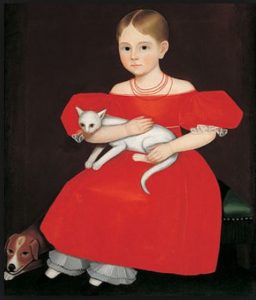 Ammi Phillips, Girl in a Red Dress With Cat and Dog

There are a handful of famous American Folk Art “masters” whose works are featured in museums across the country. Most can be categorized as either portrait painters or landscape painters, although many of these artists dabbled in both. (In general, there are many more examples of American folk art portraits than there are of landscapes.) Some well-known American portrait artists include: Rufus Hathaway (1770-1822), Ralph Earl (1751-1801), and Erastus Salisbury Field (1805-1900). The best-known artist is, perhaps, Ammi Phillips (1788-1865) whose portrait, Girl in a Red Dress With Cat and Dog, sold for over $1 million in a 1984 auction.

There are three American landscape painters who have garnered the most attention in this genre of art: Edward Hicks, Joseph Pickett, and Grandma Moses.

Edward Hicks (1780-1849) was a folk art painter from Pennsylvania. As a devout Quaker, Hicks incorporated religious motifs and themes into his landscape stories. He also depicted early colonial and pre-Revolutionary war subjects.

Joseph Pickett (1848-1918) was best known as a landscape painter from Pennsylvania. With a childlike use of color and perspective, which is one aspect of the “Naïve” style (without formal training), Pickett’s paintings have a bit of a “Van-Gogh-esque” look. 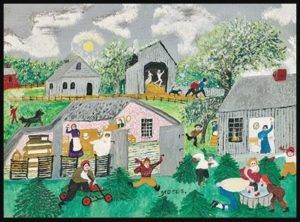 Grandma Moses (1860-1961) might be the most celebrated American folk artist. Though her real name is Anna Mary Robertson Moses, she took up painting later in her life, around the age of 72. In 1938, an art collector, Louis J. Caldor, had seen some of her paintings while visiting the area and was utterly charmed by her work and began to represent her. The press affectionately referred to her as “Grandma Moses.” She has since become a part of American popular culture – from being referenced on television shows, to her work being used for greeting cards, and even being commemorated with a postage stamp!

A life-long New England “farm” girl, Moses infused childlike whimsy and joy into her landscape paintings, as she painted endearing moments of farm life through spring, summer, fall, and winter. As the New York Times wrote of her talent: “She was able to capture the excitement of winter’s first snow, Thanksgiving preparations, and the new, young green of oncoming spring. Gay color, action and humor enlivened her portrayals of such simple farm activities as maple sugaring, soap-making, candle-making, haying, berrying and the making of apple butter.”2

Art appraisers explain, however, that an obsession with American folk art pieces gripped collectors between the 1980s and the early 2000s. Paintings by Grandma Moses and Ammi Phillips sold at auction for over $1 million. Collectors went combing for Americana quilts. Jerry Lauren, the brother of iconic American fashion designer, Ralph Lauren, bought a weathervane for almost $6 million!

After the recession of 2008, the appraised values of American folk art tumbled. Even though those “Wild-West” record-setting days for American folk art have faded, experts believe that now is a strategic time to collect pieces in this genre. There is value in this art, and experts advocate for collectors to check out other categories of American folk art, such as quilts (American filmmaker Ken Burns collects them!), weathervanes, wood carvings, fowl decays (used in hunting and fishing) and shop signs (i.e. barber shops, inns, bakeries, etc.).

Although paintings by those folk art masters have been exhaustedly harvested, some antique appraisers believe neat, graphic, and visually-appealing portraits by unknown artists could garner a solid artprice. (A painting appraisal from an appraiser would be beneficial before setting out on this quest.) Early southern folk art is another on-the-cusp-of-attention category that just might be worth looking into as well!