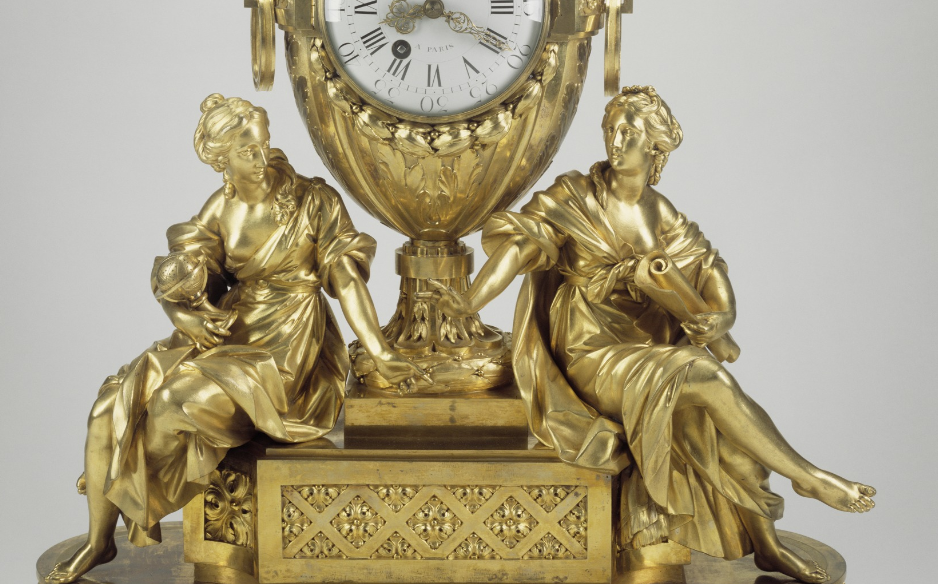 Tick-tock! Spring has sprung! What better way to welcome the arrival of springtime than with an antique French mantel clock! And with a color palette of gold, turquoise, Robin’s egg blue, pistachio-green, cotton-candy pink and malachite green, the design and decoration of 17th, 18th, and 19th-century French mantel clocks incorporate all the trappings of spring.

You’re probably most familiar with these decorative pieces as the resident time-keepers of illustrious castles and palaces (such as Windsor, Versailles, and Schönbrunn) as mantel clocks were created as display pieces for their grand fireplace mantels. These clocks are ornate: eye-catching gold masses with delicate floral designs, elegant scrollwork, flowing drapery, garland swags, and, very often, solid statuettes of angels, cherubs, or divine figures. (They would need to be striking if adorning the fireplace mantel in a vast and palatial room, though, right?!)

Several of these clocks often feature panels of painted porcelain. (Many used Sevres, the celebrated French porcelain manufacturer.) The painted pastoral-like scenes feature young maids or mothers and children frolicking in the meadows, shepherd boys tending to their flocks, or a young couple sharing a romantic walk. These scenes were, in fact, inspired by the works of Fragonard and Watteau, French masters of the lush landscape paintings.

The dominating styles are either Rococo (often associated with Marie Antoinette and Versailles) or the Neoclassic aesthetic (with Roman and Classical influences and ancient “temple” shapes) favored by Napoleon. Sometimes these clocks combine both styles. The clock face is encased within an ormolu (or “gilt bronze)1 body which sits atop a pedestal base, often perched on decorative feet. Think of Cogsworth, the beloved “clock” from Beauty and the Beast, to get a sense of the shape (but make sure you’re thinking of the live-action 2017 film, not the animated version!)

French mantel clocks from the 17th-19th centuries were often created as garnitures. Garniture is a French term used to describe a collection of decorative objects intended 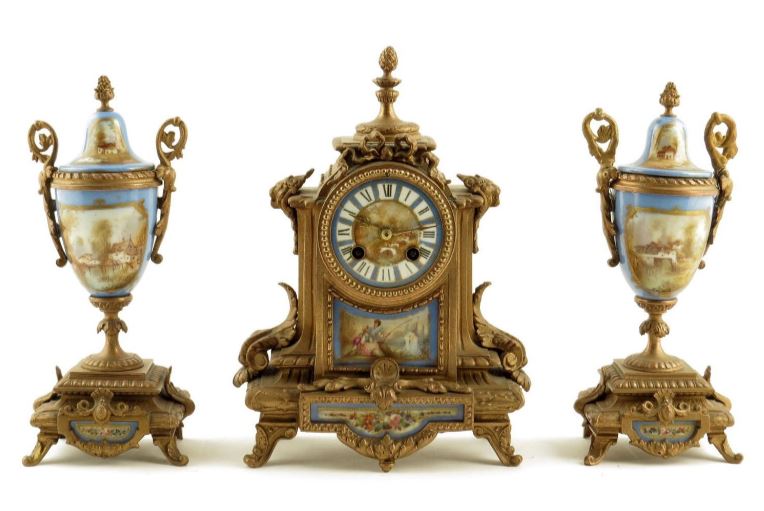 to be displayed together. For antique French mantel clocks, a garniture included the mantel lock and two similarly decorated side-objects (usually two matching candelabras, vases, or urn-like objects.) which directed the attention toward the centerpiece, the clock.

Today, these mantel clocks would bring a  studious impression to a home-office desk or add an old-world allure to a makeup vanity. Most clock command”antique prices” – from $5,000 to well over $20,000. As these clocks are quite expensive antiques, it would be beneficial to consult an art appraiser for more information. Many of these antique mantel clocks are advertised for sale on online auction sites and art sites; the condition and authenticity of the clock are of the utmost importance, and an appraiser would advise you on what to look for. More diminutive (and less costly) mantel clocks are available, and an expert could help you in locating these.