How To Ensure A Porcelain Piece Is A True Limoges 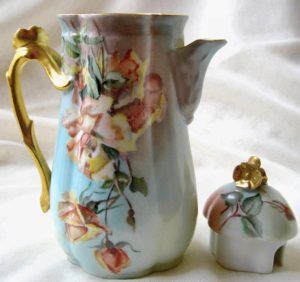 Limoges…what is it? Those porcelain dinnerware sets, trinkets boxes, and tea sets adorned with fluffy, pink, cabbage-style roses, tend to be categorized as examples of the “Limoges” porcelain. Limoges, however, is not a company, but rather a term which has come to encompass a variety of porcelain pieces produced in a specific area.

Limoges refers to a region in the middle (slightly to the west) section of France. In the 1770s, it was discovered that areas rich with suitable clay were located near Limoges, and so, several porcelain factories set up shop in this region. Therefore, “Limoges” doesn’t denote a particular company, but rather the area where the factory was located: Limoges. Debby Dubay, a Limoges porcelain expert, explains that because there were so many factories working in this area (over 48) and a myriad of identifying marks (over 400), the term “Limoges” has ultimately become a generic name for all of the porcelain produced in factories in this region” (Debay 9). (Tressemann and Vogt (T&V), Bernardaud, William Guerin (W.G.&Co.), Jean Pouyat (J.P.L.), and Haviland & Co. are some of the more widely know of the Limoges-based factories today).

Because of its beauty and quality of porcelain, Limoges pieces are still highly collected and sought after, with the factory-decorated “Limoges” being the most desired and valuable. These pieces were hand-painted by French factory artists (rather than the design applied as a decal-transfer-like sticker). There should be two marks on such a piece: the factory mark and the decorating mark. Here are some terms to be familiar with:

(I recommend studying Debay’s book, which includes over twenty pages featuring hundreds of examples of these marks.)

Limoges are a particular victim of reproductions and fakes. There are many giveaways, though, that the savvy collector can be armed with, specifically helping with the marks, material, and “maturity.” With advice from Debay’s book, here is an appraising checklist:

Meddling with the “Marks” 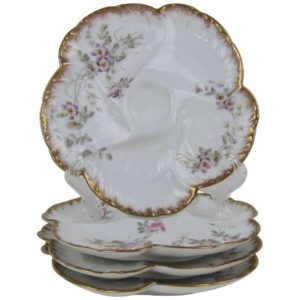 A brief history of hard-paste porcelain 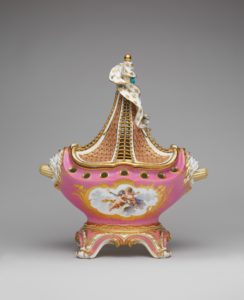 Potpourri Vase Property of The Met

Meissen porcelain, the famous German porcelain/china company, was the first European manufacturer to develop and use hard-paste porcelain, beginning in 1708. Meissen porcelain was considered the preeminent fine art porcelain of Europe, later surpassed by Sèvres porcelain. The French Sèvres porcelain factory became the standard setter of porcelain for its artistry and quality, and it still retains this prestige to this day. One spectacular example of the Sèvres magnificence is its Vase potpourri a vaisseau (the “potpourri vase vessel”). The vase vessel mimics the shape of a colossal wooden captain’s ship (you know, those massive ships decorated with baroque carvings which were painted in red, yellow, blue, green, and gold!). With the Sèvres version, beautiful gold paint outlines the billowing sail, complete with a streaming flag curling itself around the mast. Even the potpourri scent holes are a great feature – they become the tiny portholes on the Sèvres ship! This was one of Sèvres most famous pieces (coveted by King Louis XV’s mistress Madame de Pomadour). It was also one of the rarest; today, there are only ten known examples, and these mostly reside in museums.