Are We In Agreement That Collectible Plates Are Junk?

As a child who grew up in the 80s, it didn’t seem strange to me that people had commemorative plates hung on their walls. The grandmother of a friend of mine collected Princess Diana memorabilia and had several plates overlooking the dining table. I distinctly remember shortly after she died, an infomercial ran, offering a limited number of these commemorative plates in honor of her death, and my friend’s grandmother swatted her husband on the arm and said, “I had better hurry and order one before they run out!” Thinking back on that, it really is kind of creepy.

Commemorative plates were popular in the 1970s and 80s, although collectible plates date back to the early 20th century. And herein lies the potential value. We can agree that any collectible plate dating later than 1980 is essentially worthless. The market is oversaturated, what were called “limited editions” could’ve still been manufactured in the thousands, and there just isn’t really anything special about that Thomas Kinkade calendar plate set your mother pawned off on you. Unfortunately, a recent article was published stating that the majority of collector plates are worth 15%-25% of their original value.

However, very vintage pieces in mint condition could fetch a pretty penny for sure. Mint condition generally means that the plate is still in the box (or it had been displayed, it’s back in the box) and the box is also in perfect condition. Here are some other things to look for before listing your plate on an online auction site: 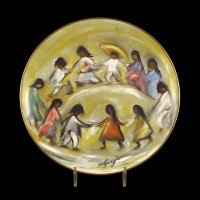 Unfortunately, most plate collections our parents pass down aren’t worth anything. But if you have the storage space, it can’t hurt to hold on to them for a while. You never know when the tides will turn. Collectors plates could be all the rage again some day!