Hailing from New York, the Madame Alexander Doll Company holds a special place in the world of dolls. The company was founded by Beatrice Alexander, along with her sisters, in 1923. The girls grew up around gorgeous dolls as their father owned the first “doll hospital” company in the United States!

The Madame Alexander Doll Company initiated many new and lasting doll trends and innovations. Beatrice Alexander invented “sleeping eyes” and eyelashes, as well as teaming up with a manufacturing company to create a ground-breaking hard plastic material for her dolls. Alexander’s dolls, however, were most admired for their beautiful outfits. As research for potential doll costumes, Alexander spent hours at the library paging through a variety of historical costume books for outfit inspiration, paying attention to the tiniest of details for historical accuracy. The world took note of her dedicated efforts. As Sharon M. Scott writes, “Beatrice Alexander won four Fashion Academy Gold Medals [1951-1954] for her achievements in doll wardrobing” (Scott 16). In fact, the 1950s are considered the “golden era” for the Madame Alexander Doll Company, as many of the dolls created during this decade have retained the highest value and allure for collectors. 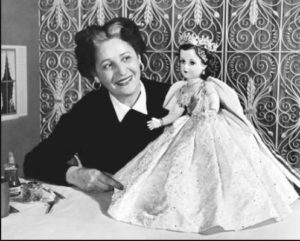 Quite a publicity coup came in 1953 when Abraham & Strauss, the New York department store, commissioned Madame Alexander to create a doll-sized version of Queen Elizabeth II’s coronation! With a desire to ensure the best outfits for these dolls, “Madame Alexander worked with the British Museum of Costume to create 36 dolls that represented the queen and her court with supreme accuracy” (Scott 15). And the set is stunning: from the queen in her ceremonial ermine-trimmed robes; her husband, the Duke of Edinburgh, in his military uniform and ceremonial robe, the Queen Mother and Elizabeth II’s younger sister, Princess Margaret, in their golden finery; her maids-of-honor in their ivory gowns and glittering tiars; various members of the church clad in their regal robes, each carrying a pillowed item for the coronation regalia: St Edward’s Crown, the Orb, the Sceptre with Cross, the Sceptre with Dove, and the Ring: to the quintet of choir boys. Prince Charles, a five-year-old boy at the time, appears in this entourage in the form of an 11″ toddler doll!

CBS television even used Madame Alexander’s royal dolls to re-enact the actual coronation ceremony for audiences across-the-pond. The set was later donated to the Brooklyn Children’s Museum, where it can be viewed today. So, how much is this set worth? It’s one-of-a-kind, but in 1953, the set was valued at $25,000!

To see this royal line up, you can also glance through pages 141-149 of Linda Crowsey’s book Collector’s Encyclopedia of Madame Alexander Dolls 1948-1965: Identification and Values (Paducah, KY, Collector Books, 2006).

The Faces (And Appraisal Values) of Madame Alexander Dolls

On average, values can range from around $300 up to $2,200. For a general guideline, think: the grander the outfit, the greater the value. Dolls with floor length gowns/dresses, or dolls with ornately embellished outfits, tend to be valued from about $700 to $1,500. dolls with knee-length dresses tend to come in between $400-$900. However, Linda Edward, a Madame Alexander doll expert, cautions that “dolls with incomplete or soiled costumes will bring one fourth to one third of the value of perfect examples” (Edward, 9). All dolls featured in her book are considered “mint” dolls (from the fairy-tale blue box, pristine doll in complete costume, and wrist tags). 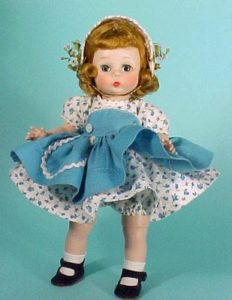 This type of doll was an 8″ doll made of hard-plastic (instead of usual composite). The “Kins” were usually given the “Wendy” face — a charming, childlike face with chubby cheeks, a button nose, and larger eyes.

BKW (bend knee walker) dolls were produced from 1956-1965. (These dolls had a joint at the knee to accommodate a variety of poses).

The “Cissette” doll face was made from 1957-1963. She was made in hard plastic with an adult female body type, produced in either the 10″ or 11″ size. She was marked with “MME/Alexander” on her back. The famous 1959 Disney’s Sleeping Beauty doll was made with the “Cissette” face type.

The “Margaret” face was first created in 1948, modeled after Margaret O’Brien, a child movie star from the 1940s. Crowsey states that “Margaret” dolls made between 1948-1956 “are some of the highest valued dolls made by Madame Alexander” (Crowsey, 190). The extremely rare “Debra Bride,” for example, is valued at $7,500. Most doll values, however, hover in the upper hundreds to one-thousand dollar mark.

0Shares
0 0
Find the value of your latest discovery. Start your appraisal