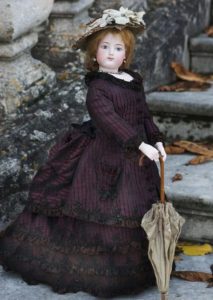 Antique European dolls, produced between 1850 and 1930, were originally designed to resemble the adult female form, rather than today’s concept of the quintessential “toddler-looking” doll. These early dolls were called “Fashion Dolls” or Poupées (the French term for “dolls”) as these dolls had the more mature female shape, and the purpose of these dolls was to showcase the latest fashions of the day (a la modern-day Barbie). Bisque – an unglazed porcelain which resembles a skin-like appearance — was the most popular medium for French doll companies during this period. (Two other similar materials which are often misidentified as bisque: (1) China dolls, which have a glazed porcelain head and (2) Parian dolls, which are made of a creamy-white, unpainted bisque (which resembles the look of marble).

The bisque doll’s body was usually made of leather, cloth, or a jointed (aka – movable) wooden body. Many of these dolls were finished with glass eyes and an attached mohair wig. (All-bisque dolls were made, but, due to their fragility, very few have survived.)

Toward the end of the 19th century, the Bébé doll, or “dolls in the image of a little girl,” took precedence over the Fashion Dolls.

Typically, antique bisque dolls (in decent condition) are worth over $2,000, with a doll in “excellent” condition worth even more. Mark Moran describes a bisque doll in “excellent” condition as follows: without cracks, hairlines, repairs, paint rub, or “wig pulls” (the improper wig removal which results in parks of the head paint being removed). The doll also still wears her original outfit – complete, and in good condition. An antique bisque doll, in excellent condition, from well-known companies could fetch up to $35,000! 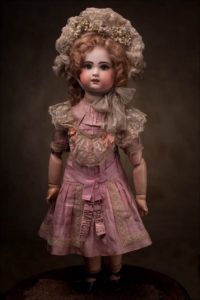 Here are some of the most famous (and highly collected) French doll-makers (information from Moran’s book):

Henri Alexandre (French company; c.1888-1895): lines include Henri Alexandre Bébé or Phenix Bébés (of which there are 30 models). In 1895, this company was later absorbed into the
Jules Steiner doll company.

A. Halopeau (French company; c. 1881-1889): Aristide Halopeau’s dolls (the Halopeau Bébés) are some of the most valuable antique bisque dolls!

Huret; Schmitt et Fils (“Schmitt Bébés”); and Petit & Dumontier: three other French companies from the late 19th-century whose dolls are rare and valuable.

(Interesting note: Antique European bisque dolls pop up quite often on Antiques Roadshow. Although most bisque dolls are tall – with most between 13″-21″ in height — in a 2016 episode, doll expert Floyd Jones indicated that the smaller-sized bisque dolls are becoming more popular among doll collectors.)