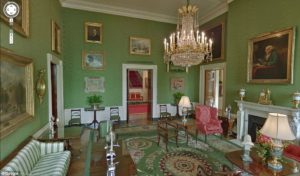 The Green room at the White House is outfitted with a Phyfe set of 2 sofas, 2 arm chairs, and 6 side chairs, gifted by heirs of the Rutherford family from New Jersey who had an estate near his workshop.

Scotting-born Duncan Phyfe (1768-1854) was the most sought-after furniture maker in the United States during the early 19th century. His clients included wealthy New Yorkers as well as affluent American families across the country. Originally beginning his career as a cabinetmaker in New York, Phyfe transitioned to furniture-making, whittling a plethora of wooden masterpieces — from dining table sets to an assortment of tables (card tables, pier tables, flip-top tables, work tables, side tables), as well as footstools, sofas in the récamier style (or the “Grecian couch”) and cabinets/writing desks.

Like his predecessors working in the Neoclassical manner, Phyfe modernized ancient Grecian furniture forms. His chairs, for example, evoke the klismos chair — an ancient Greek chair which had a curved (or “scrolled”) back and tapered out-curving legs. Phyfe also incorporated classical motifs — including lyre-, harp-, and acanthus leaves- (these are most often seen “curling” away from the tops of ancient columns) shapes — silhouetted into chair splats (the central back portion of the chair). The legs often featured carved claw or paw feet. The armrests were sometimes carved to resemble fluted columns. 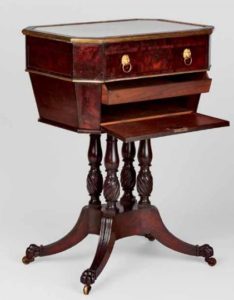 Furniture historians describe his earliest work (from the 1800s) as reflecting the English Regency style, after which he transitioned toward the more opulent and bold Early Grecian, or “American Empire” style during the 1810s-1820s. Around the 1830s-1840s, inspired by the French Restoration, the Late Grecian (or Grecian Plain Style) came into vogue, identified by classic, strong, yet simple designs.

In addition to its quality and beauty, Phyfe’s elusiveness is also part of his furniture’s fascination. As the premier furniture maker of his day, with a name recognized across the country. Phyfe rarely signed or labeled his pieces. He was also, however, the most-imitated furniture designer at the time. These two factors have made it very difficult to distinguish a true Duncan Phyfe from one made in the Duncan Phyfe “style.” (A piece in the “Phyfe style” is “imitation” furniture: it was inspired by and designed to resemble Duncan Phyfe’s work but was not made by Phyfe or his workshop. An antique Phyfe-style piece can be of beautiful, high-quality craftsmanship, but, because it is not a true Phyfe, it does not come close to Phyfe’s antique prices.)

This is when a furniture expert becomes a necessity, Due to these two factors — elusiveness and imitation — furniture appraisers are wary of identifying a piece as a Duncan Phyfe original. By the same token, Phyfe’s elusiveness and imitation also cause his pieces to have eye-popping prices. Authentic Phyfe furniture pieces have appraisal values between $30,000 to over $150,000. Having the proper provenance, or historically documented lineage (such as an invoice, a bill of lading, a letter for commission, etc.), is a critical component for attributing the piece to Duncan Phyfe — sometimes it’s the only way to truly verify its authenticity.