Halloween is a supernaturally fun holiday for children! Spooky decorations, like ghosts, spider webs, and bats trimming bushes and trees, lend homes a decidedly “haunted house” aura. The anticipation awaiting the hunt for the perfect pumpkin to carve into a jack-o-lantern with a wacky or scary face. The excitement of donning costumes and being a superhero, witch, pirate, or princess for the night. And who could leave out the trick-or-treat bags bulging with candies and chocolate?!

The Halloween collectibles we will take a look at, however, came from a time when Halloween was for adults! Let’s first see how Halloween developed… 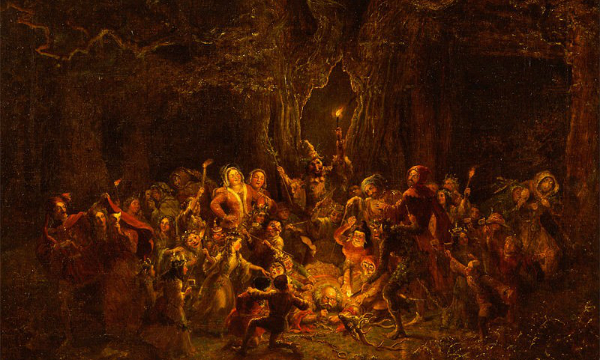 The origins of today’s spooktacular holiday derive from an ancient festival, Samhain, celebrated by the Celts (ancient people of the British Isles over two thousand years ago. Occurring in the late fall, it marked the end of the harvest season (Samhain translates to “summer’s end”); the cold, dark season of winter had arrived. The Celtic people believed that on this day of Samhain, spirits from the world of the dead could return to and haunt the world of the living. And so, the Celts had this festival with bonfires, costumes of animal fur to scare the spirits away, and “treats” left to appease the spirits. (You can start to see some of the similar traditions!)

When the Roman empire conquered most of the British Isles in the early centuries AD, Romans infused Christianity into the ancient pagan festival. By 1550, November 1st was designated as “All Souls Day” (as a day to honor the dead), and the night before, October 31st, became known as “All Hallows Eve” (and, eventually, Halloween).

Halloween came to the United States by way of English, Scottish, and Irish immigrants, though this holiday was “remade” in the U.S., leaving out the religious aspect. The Halloween holiday became very popular during the 1920s, but…as a holiday for adults! According to Halloween collectibles expert Mark B. Ledenbach, these “parties were all the rage then, but these were not for children. They were adult oriented, with guests settling in to play mahjong, bridge, and games. Tables and walls would be gaily decorated with a wide array of Halloween-themed items, setting the party’s mood. The games’ winners would be given prizes to take home, like candy containers, nodders, lanterns, or noisemakers.” 1

A glance through any Halloween collectibles book illustrates a vast array of those early 1910s to about 1950s Halloween decorations for the adult parties: 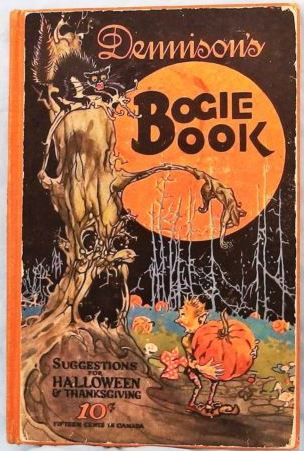 One fun category is Halloween catalogs and books! Beistle and Dennison, the two leading U.S. Halloween decoration manufacturers of the time, put out a Halloween catalog each season (Dennison named theirs the Bogie Book). The early Bogie Books (pre-1930s), which have beautiful covers, are quite collectible, with prices ranging from $100-$300! Its pages bubble with decoration themes and tips, table-setting plans, costume ideas, and gorgeously illustrated party scenes! These catalogs really give you a glimpse into this early version of Halloween – think Great Gatsby with a spooky twist! (You can glance through one here!)

According to Ledenbach, having familiarity with Halloween imagery “types” will be very helpful when trying to figure out its rarity. His ranking system follows as: 2

Also, since these early decorations were for adult parties, the imagery tended to be creepier, eerier, and more unsettling (than the cute, big-eyed ghosts and spiders we know today). The cuter, more child-friendly imagery became popular after 1950 as Halloween gradually transformed into the “trick-or-treat” day of fun for children.

Ledenbach also advises that this category of collectibles has lasting appeal and potential value because (a) holidays are an annual occasion and so they have continual (cyclical) interest, and (b) compared with Christmas decorations, which were saved as traditional seasonal heirlooms, these early Halloween decorations were usually thrown away after the party. 3