A Very Merry (Holt-Howard) Holiday To You!

Looking for a fresh way to bring that winter magic to your own holiday “tablescape?” How about giving some vintage Holt-Howard holiday ceramic decorations a try!

Holt-Howard was a ceramics company that manufactured adorable (and cheeky) kitchenware during the 1950s and 1960s. The company popped with its “Pixieware” line: little imp faces decorated the tops and lids of a plethora of condiment jars. The first Pixie set, produced in 1958, was a trio consisting of the jars named “Mustard,” “Ketchup,” and “Jam n’ Jelly.” 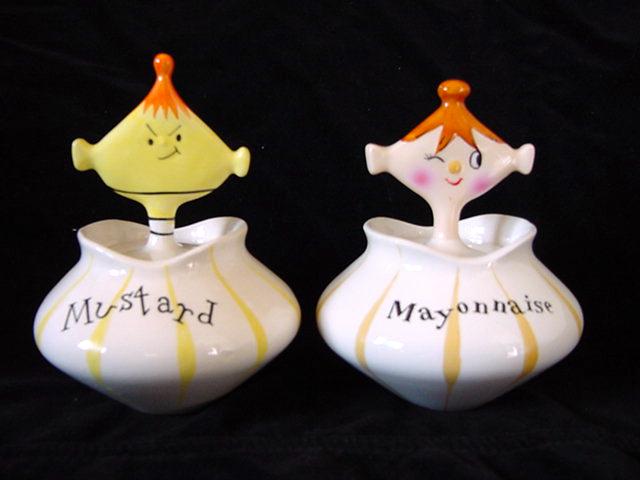 The animated elfin heads are often described as having “atomic shapes” (very appropriate for the mid-century 1950’s design aesthetic). Picture the face and hairstyle of the vintage cartoon character Judy Jetson and you can imagine Holt-Howard’s iconic triangular heads with a ponytail of hair sprouting from the top.

What also captivated collectors’ hearts was the individuality of each piece. Each imp face had a personality as distinct as Snow White’s Seven Dwarves – some cute and happy (like the “Ketchup” with a smile or “Jam ‘n Jelly” licking her lips); some mischevious (like “Relish” with a scrunched-up smirk); some grumpy ones (like “Mustard”); some sweet, but cheeky ones (like “Chili Sauce,” “Lil’ Sugar,” or “Mayonnaise” with their saucy winks); and surprised faces (like “Honey”) or goofy ones (like “Olives”)! (Another charming detail was that these glazed jars featured wonky vertical stripes and the colors of those stripes matched the jar’s identity: “Jam ‘n Jelly” had pink stripes, while “Mustard” had yellow!).

Holt-Howard also began producing just as charming holiday decorations. You can create your own retro, “Mad Hatter Tea Party” inspired, holiday tablescape by scouting around for Holt-Howard pieces. Check out estate sales, online sites, such as Etsy and eBay, or thrift stores. (Now is a good time to look as many stores highlight their holiday items).

Here are a few Holt-Howard categories that could be great for a unique holiday party! 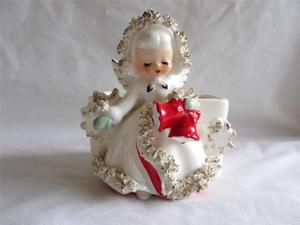 I think these pieces are gorgeous! These pieces feature “spaghetti art” — thin, spaghetti-like strands of ceramic arranged to create the texture of fur, hair, pom-poms, etc. (You may have seen vintage ceramic poodles with spaghetti art fur!) With these angels, it is used to trim their coats and capes, hoods and sleeves, with fluffy “ermine” fur. These angels are mostly white, with hints of red and green, and sometimes the “ermine” trim is highlighted with gold paint. Some angels ring a pair of bells. Some tuck their hands into fur muffs. Some are candleholders. Some are small planters. Some are salt-and-pepper shakers. If you found several of these angels, you could sprinkle them atop your table (maybe as “place cards”) or mantel for a snowy winter-wonderland look!

The Holt-Howard holiday planters would also be perfect tabletop trinkets, as you could fill them with peppermints and colorful candies! Picture Santa driving a train with a caboose “planter” brimming with candy, or an elf putting “peppermints” into the sleigh! 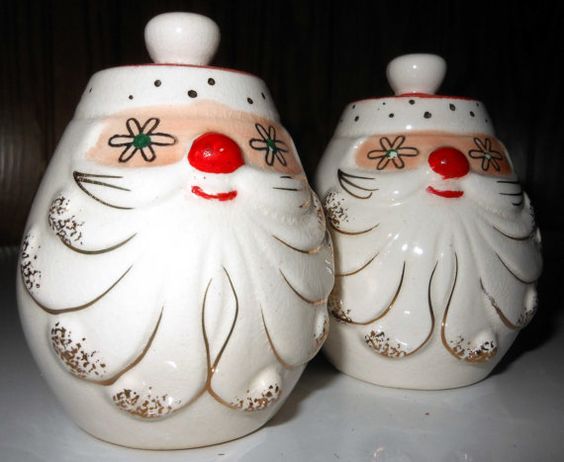 The Holt-Howard holiday-themed drinkware set seems to be some of the more sought after pieces. Some unique sets include:

So if you do want to look for one of these vintage treasures, here are some details you might like to know beforehand, like “how much is it worth?” or “what are some identifying marks?”

The market value ranges from $20-$40 to $100-$200 for complete sets (as well as rarity and condition). Sometimes sellers still have the original box. If you’re thinking about collecting these pieces, near-mint condition pieces (no chips or dents, clear paint, etc) will result in better appraisal values.

These Holt-Howard pieces were such a huge hit among consumers that many companies followed suit with their own versions, including Lefton, Napco, and Davar.

Because there are so many copy-cat versions, or competing pieces made by Napco or Lefton, as well as items mislabeled as “Holt-Howard” on online-listings, you must check for the trademark at the bottom. When you flip one of these cute cherubs over, an authentic Holt-Howard piece will have “HOLT HOWARD” printed in all caps (looks like an imperfect hand-written font) with the production year above and the copyright symbol. Sometimes Holt-Howard was abbreviated to “HH” with the year and copyright symbol.

Additionally, sometimes the original foil sticker remains. This sticker features “Japan” in the middle bar (where the item was manufactured) with the letter “H” above and another “H” below.

For some of the pieces with a smaller base, no mark was printed. A foil sticker was attached instead, but this usually doesn’t remain on pieces found today.

To become better acquainted with Holt-Howard holiday pieces, as well as to familiarize yourself with other competitors’ pieces, check out Walter Dworkin’s Vintage Christmas Ceramic Collectibles: Identification and Price Guide (KP Books, 2004).