Who would’ve thought that a Bavarian nun’s charming illustrations of children from the early 1930’s would create a collectible craze in the U.S. in the 1970s?

The famous Hummel figurines – those small porcelain statuettes starring adorable children – were initially created by Berta Hummel, a German woman who, after attending an art academy, entered the religious life and became a Franciscan nun known as Sister Maria Innocentia Hummel. With a love and talent for art, her paintings and drawings were admired by her fellow sisters. In 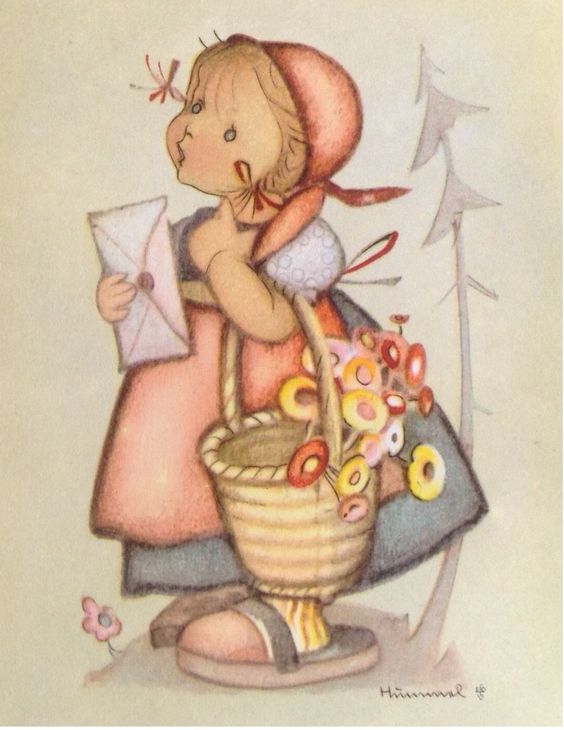 fact, they were so impressed that they sent Hummel’s work to a religious card publishing house; equally impressed, the company decided to publish and sell Hummel’s charming illustrations in postcard form.

In 1934, these postcards eventually caught the eye of the Goebel company, a German manufacturer of porcelain figurines and dinnerware. The owner, Franz Goebel, thought Hummel’s theme of happy, playful children would work brilliantly in the figurine form. He bought the rights to Hummel’s drawings and soon began transforming the illustrations into figurines. In 1935, forty-six pieces were designed, based on Hummel’s original illustrations, and sold at the Leipzig Trade Fair and they were an immediate hit!

Hummels were particularly popular in the U.S., becoming a collectible obsession by the 1970s. This popularity may be due to the nostalgia associated with World War II, when U.S. soldiers, who were stationed in West Germany during the war, sent these cute tikes home as gifts.

Huh? A Hummel…what is it?

The key to understanding Hummel figurines, and their appraisal values, is becoming familiar with the important information printed or stamped on the base or bottom of each piece. This information consists of symbols (trademarks) and numbers (Hummel piece identification).

This brings us to trademark designs and production years!

The Hummel figurines have had many trademark evolutions. So far, according to Hummel historian and avid collector Heidi Ann von Reckinghausen, the trademarks have been grouped into nine categories (from TMK-1 to TMK-9).

TMK-9 (2009-present): Goebel was bought out by Manufaktur  Rodental in 2009. This trademark features a cursive-like “M.I. Hummel” printed inside a circle with a yellow bee in the corner and “Manufaktur Rodental” underneath the circle’s outer edge.

*There are 12 variations of the bee, btu the TMK-2 bee is more equal in size with the letter “V,” whereas the TMK-3 bee is smaller with a larger “V.”

Restored pieces are worth less than ones unbroken in “mint” condition.

Imitations: usually produced in Japan or Hong Kong; much lighter in weight; difference in color/shine.