Rookwood pottery was one of the most illustrious American pottery manufacturers of the late nineteenth and early twentieth centuries. Winning awards at several international exhibitions and world’s fairs, such as the 1893 Columbian Exposition of Chicago and the 1900 Exposition Universelle in Paris, Rookwood pottery also garnered international acclaim.

Maria Longworth Nichols, a wealthy Cincinnati socialite and amateur artist herself, formed the Rookwood pottery company in 1880. After viewing Japanese-inspired ceramic works at the Centennial Exhibition in Philidelphia in 1876, she hoped to establish a company that could produce works of art rather than commercial domestic wares. Nichols hired talented artists to design the ceramic pieces to elevate the Rookwood name alongside British and European pottery companies, such as the English Wedgewood or the Belgian Boch Freres. (The name “Rookwood” was inspired by Wedgewood: Nichols combined the “rooks” [or crows] that lived on her childhood country estate with “wood” to strike an allusion to Wedgewood.)

Today, Rookwood pottery is considered an outstanding example of American decorative arts. These pieces are quite sought after and collected (especially by Americans), and they frequently appear on Antiques Roadshow. One of the rarest pieces of Rookwood sold for $350,000 at auction! 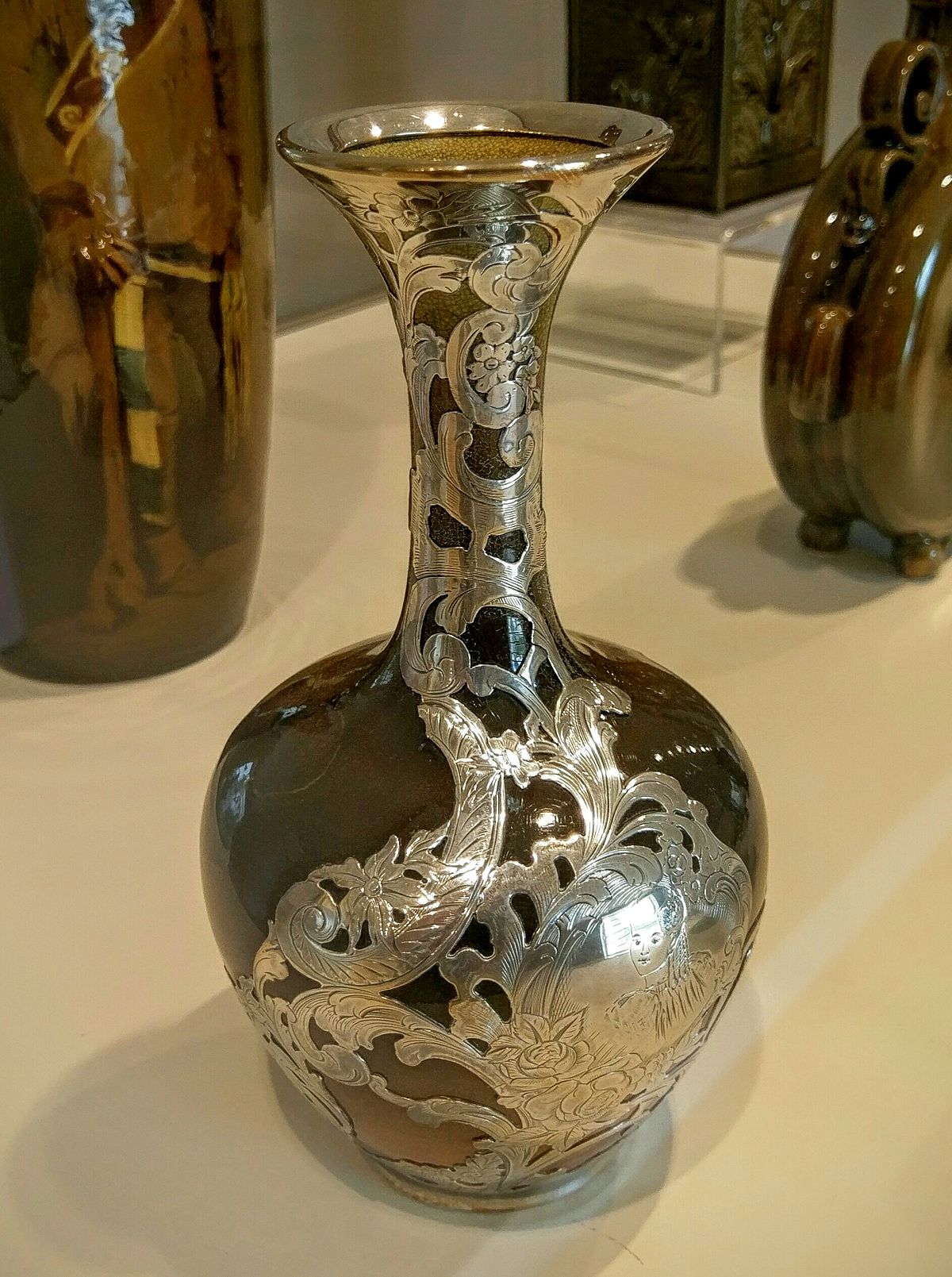 As Maria Longworth Nichols hoped for her pottery, the pieces were considered then, and now, as works of art. The artists hired by Rookwood developed alongside art movements and their designs reflected the prevailing artistic style of each year: Japonisme, Impressionism, Art Nouveau, and Art Deco.

Rookwood has several lines, or rather “glazes,” of note: Standard Glaze; Tiger Eye; Aerial Blue; Iris; and Black Iris. Flora and fauna designs are the most common subjects.

Its “Standard Glaze” (produced from 1884-1909) is one of its most recognizable and iconic looks. It features a darker overall color which fades and melts into waves of olive green, burnt yellow, burgundy, and cream.

“Tiger Eye” was a special glaze. Featuring a dark red ochre base color, “Tiger Eye” has a shimmering sheen that captures light beautifully.

Produced for just one year, 1894-1895, “Aerial Blue” was not commercially successful; therefore, few pieces were produced and so this line is rarer and its pieces are valued higher. With its white and blue color palette, “Aerial Blue” was inspired by delft design, and particularly by Royal Copenhagen porcelain.

“Iris” (produced from 1884-1912) was a popular line. Some of Rookwood’s most sought after artists worked with the “Iris” glaze, including Carl Schmidt and Kitaro Shirayamadari. The “Iris” glaze consists of a muted, pastel color scheme and has a delicate, ethereal look. For several “Iris” pieces, when the colors fade into a white toward the bottom, the pieces seem to float in the air. Rookwood pottery experts Denise Rago and Jonathan Clancy explain that for the beginner collector, smaller examples of “Iris” are affordable and retain their appraisal value. Pieces without crazing (a spiderweb-pattern of faint lines that develops on glazed surfaces) are extremely rare but will command high prices. 1

“Black Iris” is a variation of the “Iris” glaze. It features a deep black color with floral or fauna designs. (That auction record of $350,000 set for Rookwood pottery in 2004 was for a “Black Iris” vase designed in 1900 by Kitaro Shirayamadani.) 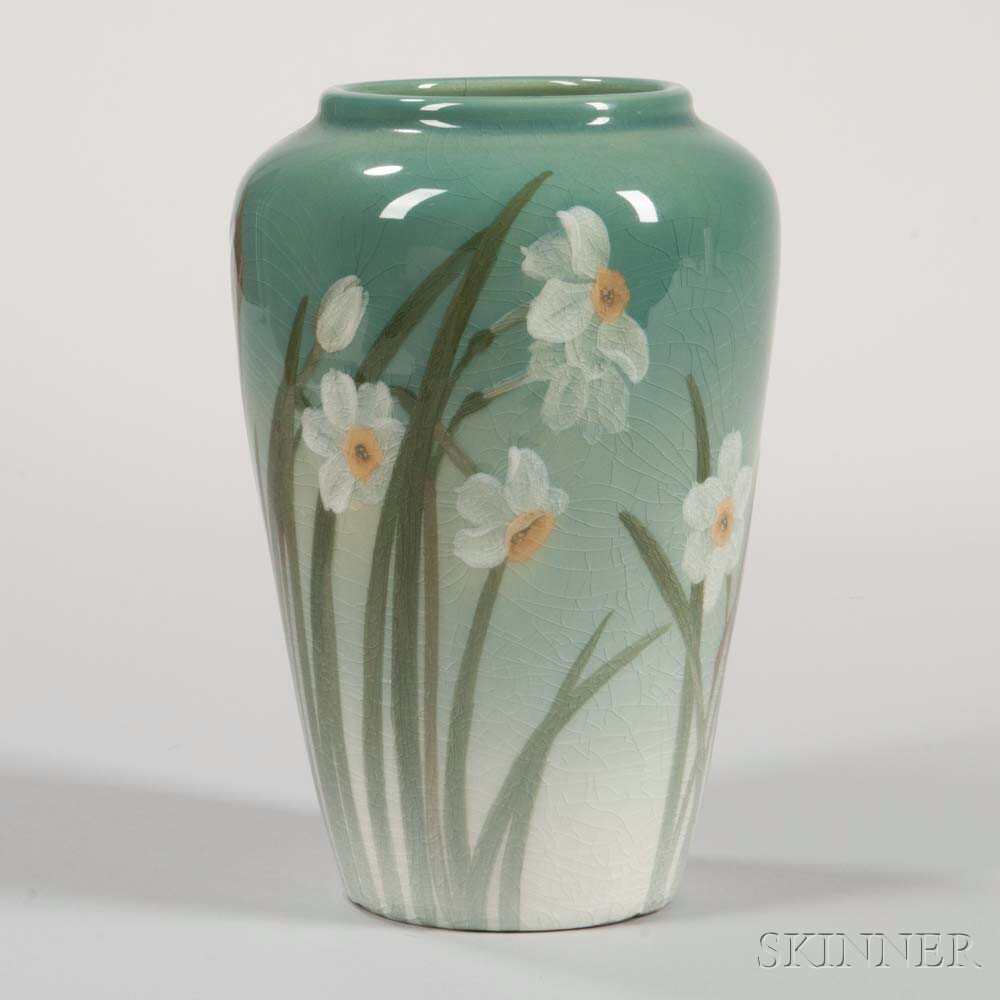 Marks: Rookwood pieces are clearly and distinctly marked with the Rookwood name, the date, and the artist’s initials or name.

If you have a small collection of Rookwood pieces, you might consider getting an art appraisal as Rookwood pottery is considered an American art form, and so, a collection could be appraised significantly. You might also have a unique bit of history with your Rookwood pottery!

The glazes and artists described above are from Rookwood’s artistic branch of the company, which created hand-painted works of art. Rookwood also manufactured a more commercial, mass-produced line of wares beginning in 1904. These pieces are not hand-painted but instead consist of a single-colored matte glaze, usually without decoration. These pieces’ values are usually under $1,000. Some unique and functional pieces are the book-ends, modeled after a variety of subjects, such as peacocks, owls, Chinese dragons, Spanish galleon ships, and elephants!