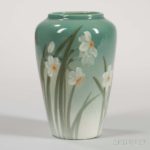 Rookwood pottery was one of the most illustrious American pottery manufacturers of the late nineteenth and early twentieth centuries. Winning awards at several international exhibitions and world's fairs, such as the 1893 Columbian Exposition of Chicago and the 1900 Exposition Universelle in Paris, Rookwood pottery also garnered international acclaim. Pottery as an art form blossomed during the ... END_OF_DOCUMENT_TOKEN_TO_BE_REPLACED